Interim colours and a half-way house in 1972

For most of the lifetime of the corporate identity, its application was strictly policed by NBC from its London headquarters in New Street Square. The first Manual was developed during the course of 1972 and issued to local subsidiary companies in stages as Norman Wilson oversaw the development and initial roll-our, starting with the National ‘white coach’ network, followed by a new identity for local buses, and later a new standard livery for regional express ‘semi-coach’ or ‘dual purpose’ vehicles.

There were some differences in the rules in the very early days, as well as various interpretations and mishaps, mostly stamped out quickly by HQ.  These included overuse of white bands where local staff felt the main blocks of unrelieved green or red gave larger buses a drab look, and attempts to replicate the cream and black lining from the traditional liveries with additional white bands, particularly on double-deck vehicles.

A more common occurrence – initially sanctioned by NBC HQ – was an ‘interim livery’ to help to accelerate the roll-out of the new identity. Buses not due for a full repaint into the new corporate colours would simply have white or cream ‘thick’ bands painted over the original cream and black waistbands, with new NBC-typeface fleetnames and logos applied over the existing darker shades of red and green. Remarkably – given the later strict policing of the new corporate colours – cream NBC symbols and fleetnames were issued by NBC and used by many operators, to match the cream waistbands of the traditional liveries.

This was stamped out later in 1972. As Norman Wilson said in the later Manual, “It is of vital importance to the overall maintenance of the National Bus Company image that colour schemes and usages are strictly followed. The use of red, per se, is not the same thing as the use of the correct red.”

Though initially approved, this half-way solution undermined the all-important consistency of the new Corporate Identity, so was frowned upon by HQ, and had largely disappeared within a year.

Sydney Eade was a conductor working at Lowestoft for Eastern Counties in 1972 when the new livery started to be rolled out, and remembers the early mixed livery attempts, as illustrated by Bristol MW LM944 at Ipswich, “just after ‘conversion’ to NBC livery by painting put the cream band and black lining in ‘fat white’. The old fleetname has vanished but the new double ‘N’ white one has not yet been employed.”

Sydney, an active preservationist with the Eastern Transport Collection Society since its early days, remembers the arrival of the first repainted NBC red Bristol Lodekka to arrive at Lowestoft – possibly LFS86 or 87. “I got to work on it on the first day of service”, he says. “I thought it was amazingly smart and gave the bus a new life, and I had no feelings of regret that Tilling red was on the way out at the time.”

Thanks to Sydney Eade for permission to use the photos of Eastern Counties vehicles on this page.

Don’t forget East Kent’s attempt to get around NBC white for coaches. They used llRC a combination of grey, white and their traditional maroon, together with a standard white EAST KENT fleetname but omitting the double-N symbol. Stamped out pretty quickly alas.

You don’t happen to have any photos of this corporate disobedience, Kim?

Active all that time pmsl!!!! 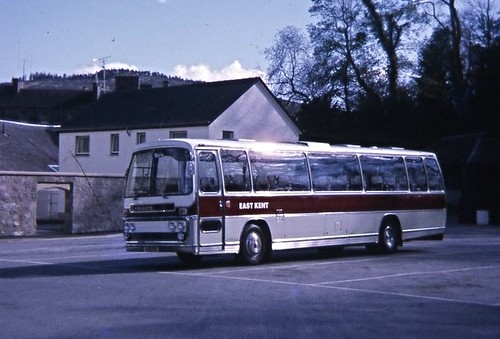 Fantastic- thanks. I’ll add that into another story if that’s OK. 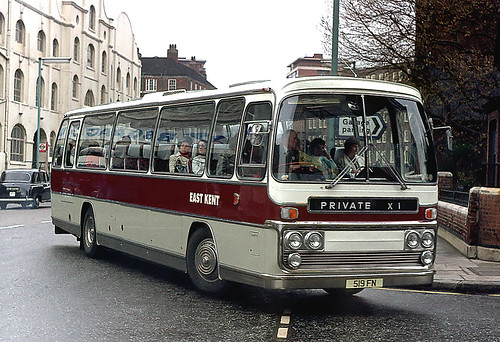 Eastern Counties also repainted buses in NBC livery but using Tilling red as the base colour, on order to use up old paint stocks. Numerous FSs were given this treatment but didn’t last long before receiving another repaint in poppy red.